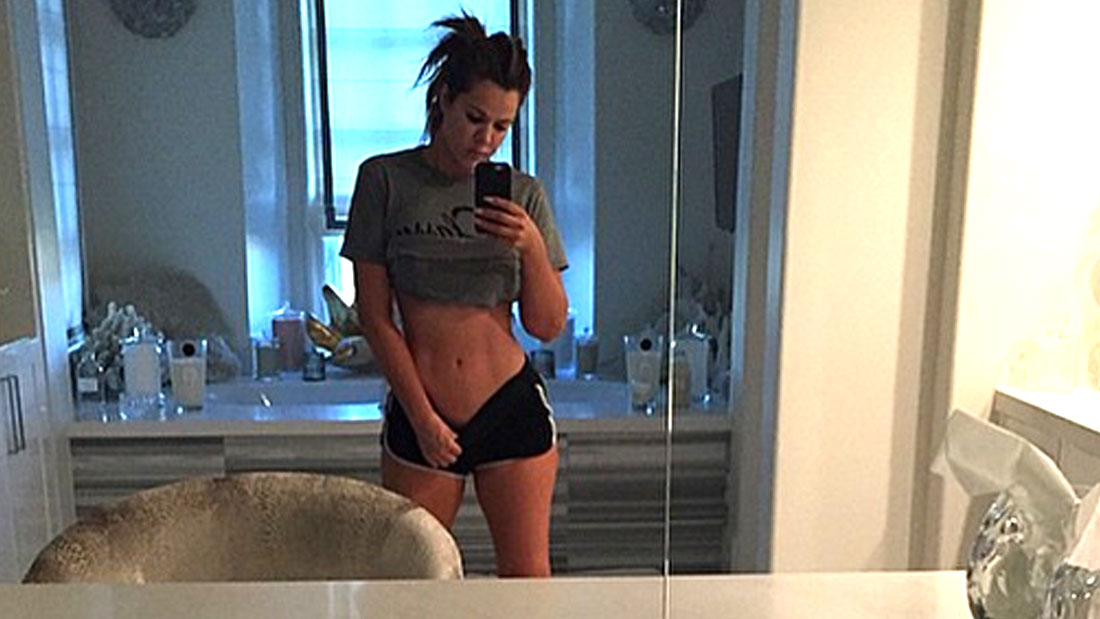 While Demi Lovato recently used Instagram to promote a healthy body image as she dissed the thigh gap, one other such inspiration comes from surprising quarters—a member of the Kardashian clan.

We’re all for using celebrities as role models to motivate you into a healthier lifestyle; but, with the rampant Kardashian “kraze” that’s treads slightly on the vainer side, it is always advisable to take things with a grain of salt.

Instead of Kim and her bootylicious figure that does a taciturn in between weights and sizes—what with marriages, baby weight, photo-shoots and all that—we’ve got our eyes on younger sister Khloe, who has struggled with weighty issues most of her life.

Word To The Wise
Her recent Instagram post showing off a well-defined mid-riff is the result of a slow-paced, steady fitness schedule that aimed at making her healthier; not skinnier.

Having lost 25lb without any crash or fad diets, and plain good ol’ hard work, Khloe says, “My fitness journey will be a life-long journey. Fitness is not about being better than someone else… It’s about being better than you used to be. I’m not where I want to be and who knows if I ever will be. But I am healthier than ever and due to my consistent workouts, I am slowly seeing results.”

So how did the “fat kid” of the Kardashian clan lose all that weight? And mind you, Khloe wasn’t fat to begin with; it’s just how she was made to feel in comparison to her skinnier, smaller-built siblings. “People love to call me the fat one, but as weird as it sounds I still don’t think I would consider myself fat back then,” she says. “Definitely overweight and unhealthy, yes. About two years ago I decided to turn to fitness as a form of therapy and as a stress reliever.”

Diet & Workout Are Key
The Kardashian regularly exercises under the watchful eye of her trainer Gunnar Peterson, and follows a strict low-fat diet. Khloe knows that a little boxing, in her case, has gone a long way. According to Peterson, “The knockout moves will train your core and tone all parts of your body. You’ll definitely feel the soreness.” However, it doesn’t end at boxing. She also indulges in 4am cardio workouts to get her blood pumping.

And as everyone knows, it’s important to replenish lost fluids during, and after every workout. Khloe does so by drinking plenty of protein shakes and water. Also, nothing beats a healthy breakfast to kick-start one’s metabolism. Khloe prefers organic oatmeal topped with bananas and cinnamon. She also indulges in a hot cup of tea with organic milk and raw honey before calling it a night.

Now, everybody’s body and metabolism tends to differ. What works for one person might not necessarily work for you. It’s important to keep this in mind when following a celebrity fitness routine. But more importantly, remember to enjoy your fitness journey, do it the healthy way, and for all the right reasons.

Read More:
Fast Five: Zooey Deschanel Loves Spin Class & You Should, Too
Role Play: When Celebs Got Candid About Their Fitness Struggles
Listen Up Beyhive, We Have Queen Bey’s Workout