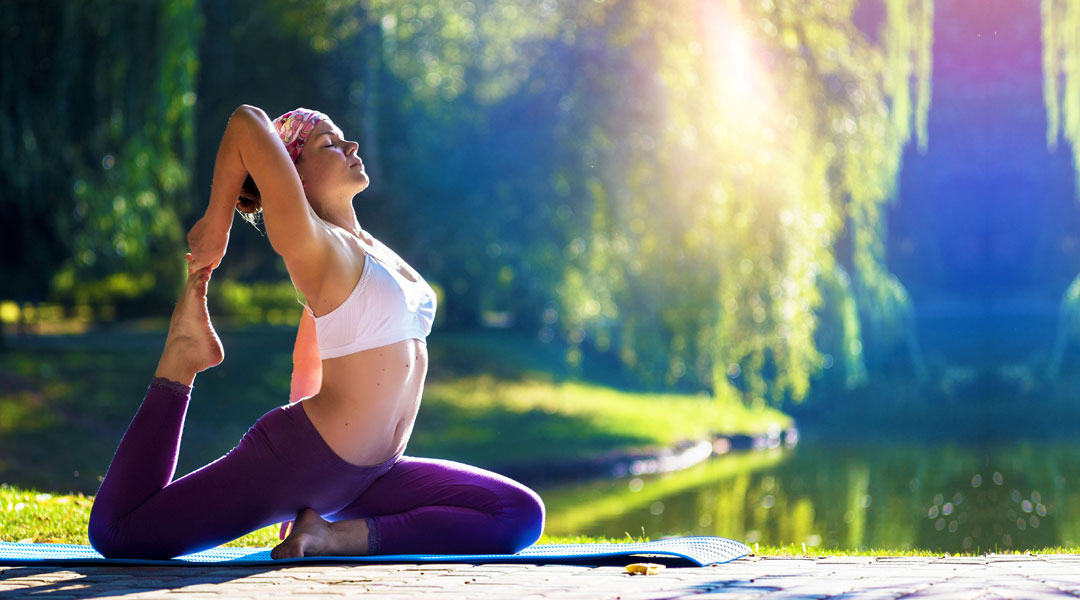 Yoga for weight loss works in several ways. First all those stretching and postures aren’t just about flexibility. They build core strength. They push your body aerobically and burn calories.

And yoga helps reduce stress. High levels of stress are linked to weight gain. This is because when you are stressed your body produces the hormone cortisol. Too much cortisol can slow your metabolism, causing weight gain. And it can make going on a diet more difficult.

Origins of yoga
Yoga originated not as a form of exercise, but as a spiritual practice. According to Sankhya Philosophy, the word yoga means separation (disunion, viyoga) of spirit from matter. It is heavily tied to the teachings of Hindu philosophy as a form of meditation that will free the body from suffering.

Yoga is very ancient:
Some forms of yoga practice were probably prevalent in India as early as 3,000 BC. By 800 BC, the beginnings of the Yoga system were starting to be formalized in the Upanisads, the philosophical texts that are the foundation of the Hindu religion.

Yoga came to the west in the mid 19th century along with other aspects of Hindu philosophy. The first Hindu teacher to actively teach yoga to a western audience was Swami Vivekananda, who toured Europe and the United States in the 1890s. At that time, yoga was not merely a form of aerobic exercise but a spiritual practice that included exercises to help concentration. Today, in the west, some schools of yoga will include aspects of this spiritual philosophy, but most teach it as a form of aerobic exercise only.

What exactly is yoga?
There are many different forms of yoga, such as hatha, Bikram, Ashtanga. Each use exercise as a way of becoming more grounded and building core strength. Each use breath techniques to center body and mind.

Yoga improves strength – the poses in yoga are not easy. While beginners will start with easier poses, they become more challenging as they advance. These poses require balance and strength, and have been honed for hundreds of years to release any underlying tension in the body.

Yoga reduces stress – Stress and weight gain are often linked. When the body is stressed, it produces the hormone cortisol. Too much cortisol can slow your metabolism, increasing weight gain.

Other benefits
Helps mental clarity – the yoga poses are specially designed to help the flow of energy in the body. By providing some grounding and releasing tension, they help center body and mind.

Positive energy – because yoga originated from a religious practice, some forms retain these spiritual underpinnings. Yoga is based on the principles of compassion for others and calm wisdom.

Increases Flexibility –The positions and stretches that yoga uses are designed to exercise the different muscle groups and internal organs. It is designed to help the overall health of the body, to release tension, and tone muscles and build core strength.

Yoga boosts endorphins – Like all forms of exercise, yoga boosts your endorphins, chemicals in the brain that cause a sense of wellbeing.

Yoga for losing weight is not necessarily the quickest form of weight loss. However, it can help reduce stress, and increased stress has been linked to weight gain. Yoga is a form of aerobic exercise that can provide an excellent workout. In addition, there are many other benefits, such as improved flexibility, mental clarity and the centering of body and mind.