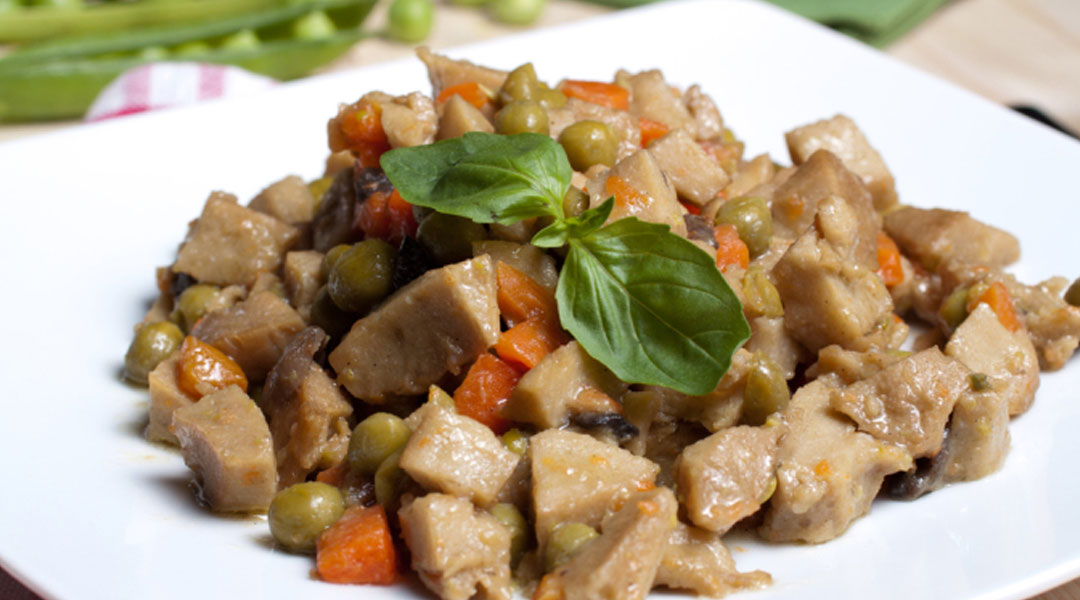 Being a vegetarian isn’t always easy. You may miss meat or it can be difficult to find easy-to-prepare meals that are high in protein. Fortunately, there are a growing number of meat substitutes that are affordable and available in most grocery stores. Seitan is among these foods and provides the body with a very high quality protein.

Seitan = Wheat gluten
Seitan is made from the extracted gluten in wheat. If you’ve been to a vegetarian restaurant, you may have eaten it without realizing it, because it is sometimes instead referred to as “mock-meat,” wheat meat, mock duck or wheat gluten.

Although seitan is most commonly used in Asian foods, its uses are diverse. Seitan fajitas, southern fried seitan, creole seitan, tandoori seitan: the recipes are endless. Seitan can be made at home by blending together wheat gluten and vegetable broth, or prepared seitan is available in the refrigerated section of most health food stores. With a bit of creativity, one can come up with many different ways of preparing and enjoying it.

As much protein as steak with less fat and cholesterol
Seitan can be a replacement food for anyone who does not eat meat. Seitan is the perfect meat replacement as it has the look and texture of meat, when cooked. In terms of nutrition, seitan is a powerhouse. Sirloin steak and seitan both supply approximately 16 grams of protein per 100 gram (3.5 ounce) serving, or about 25 percent of the U.S. Reference Daily Intake. This is twice as much as an equal amount of tofu and 40% more than is supplied by two medium eggs. It also has less fat, saturated fat and cholesterol. A 3.5 ounce steak contains 11.5 grams of saturated fat, 58 milligrams of cholesterol and nearly 300 calories. By contrast, seitan contains no saturated fat or cholesterol and only 120 calories per 3.5 ounce serving.

Like meat, it can also absorb the flavors of whatever it is cooked with, such as curries, marinades or soy sauce. Although not currently as popular as tofu, seitan is quickly gaining popularity, especially in vegetarian restaurants.

You don’t have to be a vegetarian to enjoy seitan.  Anyone can use it as new version of their favorite dish by using seitan to replace the meat.  It is easy to prepare, with a plethora of recipes. It can be fried, steamed, baked or barbequed.

Not for those with gluten allergies
Seitan is made by extracting the gluten from wheat.  If you have a gluten or wheat allergy, you should not eat seitan. Some vegetarians and vegans may do not eat seitan as they consider its texture and taste to be too much like meat.

Seitan alone is very healthy, but recipes vary. For example, some recipes call for frying the seitan, which can boost its fat content. Other recipes marinate it in soy sauce, which is high in sodium.

Seitan is an excellent cooking option.  It is a nutritional powerhouse, with the protein equal to sirloin steak, although with less fat and saturated fat. It can be very close to the texture and taste of meat. Seitan is popular in vegetarian establishments, and is increasingly found in mainstream groceries or restaurants.

Read More:
Vegan-Friendly: How to Spice And Season Your Meatless Meals
Tofu: A Healthy Substitute For Meat Or Dairy
Healthy Twists To Your Favorite Pasta Recipes