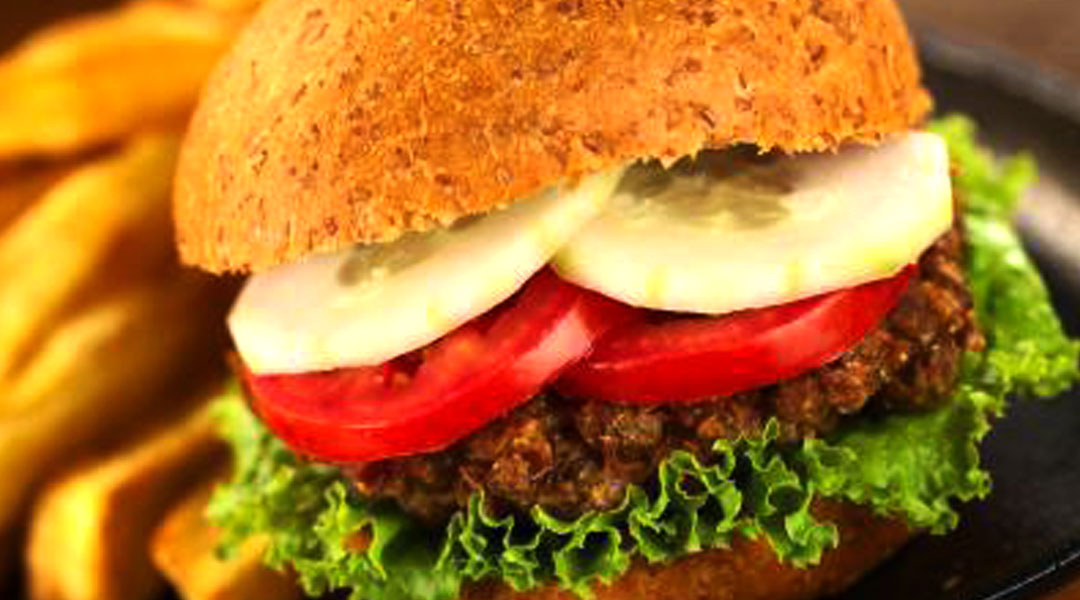 The first veggie burgers, from the 1980s, were made only for the most committed. Bland, lumpy, and dry, they were the culinary equivalent of fried cardboard. Luckily, with the rise of animal welfare concerns, the grow-your-own food movement, and environmental issues, the veggie burger has come a long way. Today there are veggie burgers made from mushrooms, onions, brown rice, rolled oats, cheese, eggs, garlic and spices (the Garden Burger), soy protein and wheat gluten (Boca burger), soy (Burger King burger), and others. Some aim to mimic the taste of meat, while others taste more like veggies. Or you can make your own veggie burger with portabella mushrooms, black beans, or soy meat.

The benefits
Compared to real hamburgers, veggie burgers are usually better for you in a number of ways – they tend to be lower in fat (especially saturated and trans fats), higher in fiber, and lower in sodium. A commonly held perception is that veggie burgers have less protein, although usually the difference depends on the veggie burger in question. For example, soya meat (also called soy meat, textured vegetable protein, TVP) has a similar protein content to meat. Soy meat is also fat free, meaning that it has fewer calories than meat and it tends to be cheaper than ground beef. TVP is also better for the environment, using less land, water and fuel resources to produce. TVP can be bought as patties or in powder form that hydrates with water or vegetable broth.

By itself, TVP can be fairly bland and needs to be brought to life with seasonings. Ketchup, sautéed diced onion, cayenne pepper, a pinch of oregano, a dash of Dijon mustard, soy sauce, and garlic are all seasonings that will give spice up your vegetable burger recipe.

If you are eating in a burger chain, the chances are the veggie option will be more nutritious. For example, Burger King’s BK Veggie sandwich has 16 g fat, with little of the harmful types of fats: 2.5 percent saturated fats and zero trans fats. In comparison, the restaurant’s meat option Chef’s Choice has three times the overall fat (50 g), and more of the bad types of fat: 21 g of saturated fat and 5 g of trans fats. The veggie version is still high sodium, although still lower than the meat alternative: 69 percent of the daily RDA, compared to a whopping 121 percent (1820 mg) for the Chef’s Choice. It also has less protein: 22g, compared to its Chef Choice with 39 g protein.

Making your own veggie burger allows you to moderate the fat content, lower the sodium, and add seasonings and vegetables that suit your taste. Most veggie burger recipes use black beans as a base, although some use mushrooms or soya meat.

Method:
Combine the TVP with the vegetable broth in a large bowl and let sit for 15 minutes. Once the TVP has soaked up the liquid, add the remaining ingredients and stir well. Mold into patties and fry in vegetable oil until golden brown. It’s a good idea to use a light tasting oil for veggie burgers, such as canola or sunflower because olive oil can mask the other flavors.

Method:
Mash the beans in a large bowl or in a food processor and add the rest of the remaining ingredients. Mold into patties, and fry lightly in vegetable oil until lightly seared. Or you can grill or BBQ either veggie burger recipe.

Don’t overdo it
Whether TVP, black bean or mushroom, veggie burgers are high in protein, very low in fat, zero trans fats and low sodium. However, burgers are like Johnny Depp of the Pirates of the Caribbean movies – better when well accessorized. If you add mayonnaise, grilled cheese, ketchup, sautéed onions, the sesame bun – your meal might be more to your liking but is no longer as healthy. We all need a little nutritional vice in our meals – the key is to do it in moderation.

How do I make my veggie burgers healthier?

Read More:
Tofu: A Healthy Substitute For Meat Or Dairy
Cooking With Lentils
The Diabetic Diet: What You Should Know