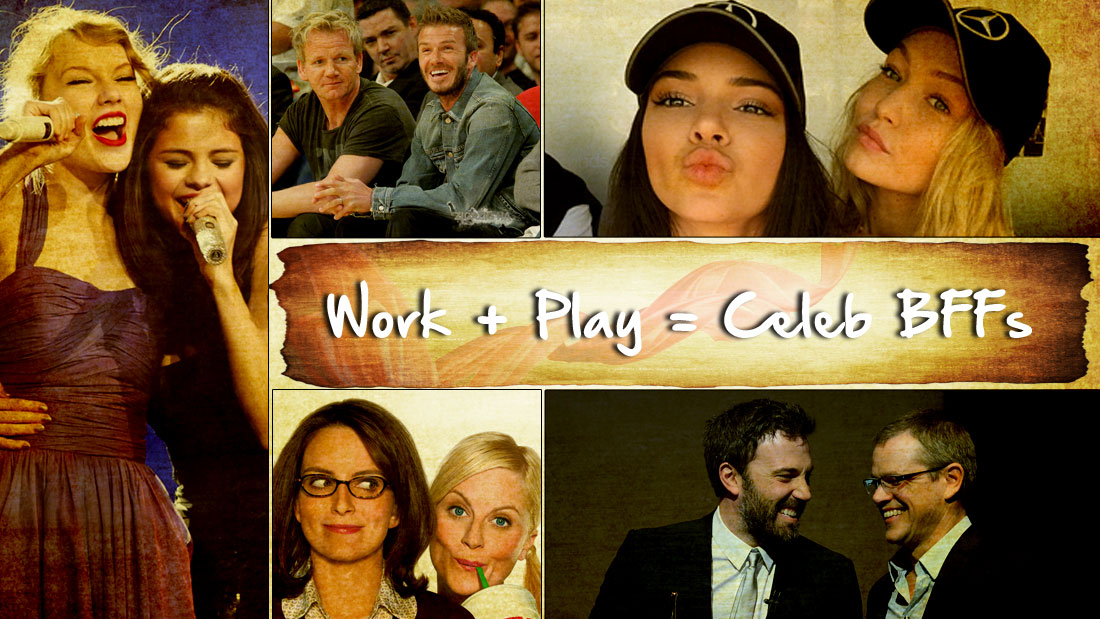 Celebrities lead stressful, hectic lives and are always in the glare of the spotlight with everything—from their diet and attire to their relationships and their habits—under constant public scrutiny. To top that, being a media personality means they’re always surrounded by people whose livelihood depends on them, or people who want to benefit from being associated with them. Which is why it’s extra special when super famous folks succeed in finding friends who they connect with on a deep level. And when that friend is another celeb, that’s a bonus!

We look at five such celebrity pairs, who stay together in work—and outside of it, too.

1. Some celebs are lucky to work with their friends from before they were famous, such as the now legendary Matt Damon and Ben Affleck. The Hollywood hunks met when they were 10 and eight, respectively. They shot to fame when they were in their late twenties with the movie Good Will Hunting, which was based on their own screenplay, and ended up being nominated for nine Oscars, and won two.

2. Their female counterparts are Tina Fey and Amy Poehler, who also met more than 20 years ago, when they were studying improv in Chicago. Since then, they’ve worked together on several projects together, including hosting the Golden Globes three times, shows like SNL and movies such as Mean Girls, Baby Mama and their soon to be released Sisters. They’ve both authored books in which they dedicated a chapter to their bestie.

3. Model Gigi Hadid is a frontrunner for the new attitude of lots of love and support, as opposed to the cattiness that ruled the runways traditionally when models competed for assignments. She’s publicly admired fellow model Kendall Jenner, and her social media accounts mirror their close friendship. She’s even gone on record saying, “Friendships are a lot more valuable than one’s job. If you’re going to let it ruin that, then that’s stupid.”

4. They come from different worlds but both have several things in common: global cult followings that run into millions, sky-high net worth, a taste for shiny black Rolls-Royces and custom-built monster motorbikes and, of course, glamorous wives with adorable kids. Sure, one’s a footballer and the other’s a chef, but David Beckham and Gordon Ramsay are also both businessmen and big on family. Friends for years, they’ve spent Christmases together, and Ramsay and wife even flew to Morocco for Beckham’s 40th birthday a couple of months ago. Now that they both live in LA, they see much more of each other. Although their plan to open a restaurant together fell through, there’s no telling what possibilities this future bro-mance holds.

5. These two have been the most on again-off again celebrity BFFs ever, with their ‘thick as thieves’ friendship playing out dramatically in the full glare of the media. Taylor Swift and Selena Gomez are full of love for each other and make it a point to unabashedly let the world know this. Aside from that small hiccup called Justin Bieber (Taylor dislikes him so much that she reportedly gave Selena an ultimatum—him or her), these ladies are an inspiration for best friends everywhere. If you don’t believe us, check out the video of Bad Blood, where they totally kick ass together.

Read More:
Frienditation: Why You Must Meditate With A Friend
Bonding With The Neighbors Helps During Difficult Times