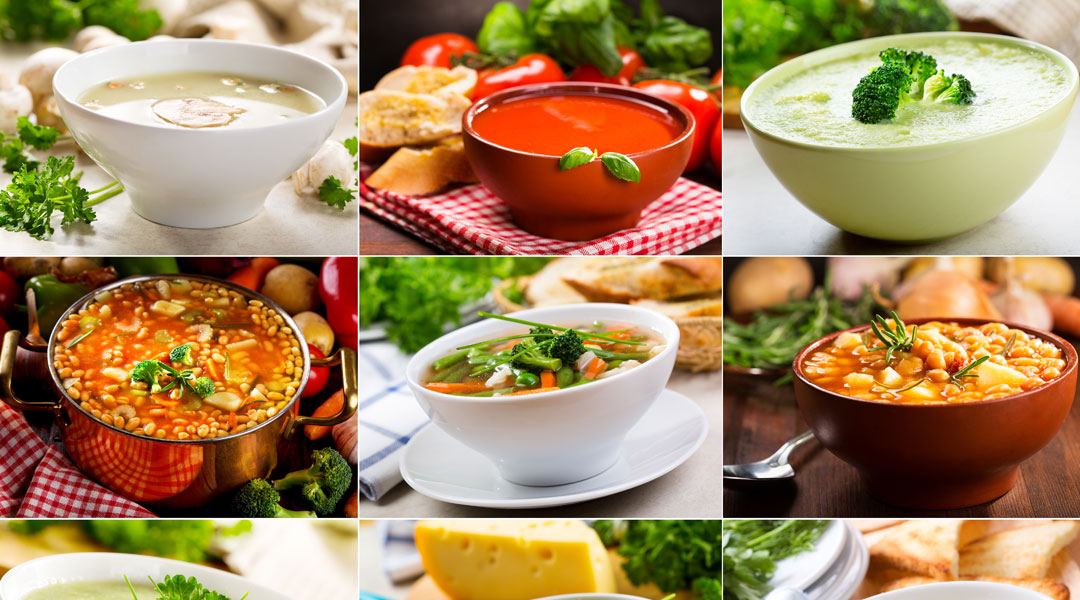 Soup Recipes Are Quick & Complete Meals
The soup is one of human’s earliest dishes, with evidence of the soup dating back to 6000 BCE. Most are easy dishes to make that warm the body and soul on a cold winter’s day; although there are ones served cold to cool the brow on a hot summer’s day. Soups are classified by their thickening agents: purées are vegetable soups thickened with starch; bisques are made from puréed shellfish or vegetables thickened with cream; consommés are clear soups made from broth, stews tend to be thicker, and have more chunky ingredients.

Soups appear in almost every cuisine, the flavors determined by the local ingredients. Asian soups are more likely to be thickened with rice or noodles; French soups with cream, Thai soups with coconut milk, Spanish soups are often tomato-based. However, these are merely stereotypes; with multiple exceptions to each rule.

Soup Recipes – What Goes Into This Recipe?
Soup recipes tend to require deglazing, caramelizing, sautéing, and thickening. The success of the soup will depend on the quality of the broth so it’s best if you make your own, or if not, find one that comes highly recommended. If you are making a broth, whether vegetable, chicken, or fish, it’s worthwhile making it in bulk and freezing it to use at your convenience. Because of its high water content, soups and broths freeze well, so you can cook soups in bulk and then freeze for a rainy day.

Soups can be a welcome addition to a low-fat diet, especially if they are water or vegetable-based. Most soups are primarily water-based, so they will fill you up, even if low-calorie.

Popular Soup Recipes:
Ravioli and vegetable soup recipe – The ravioli in this soup turn a light dish into a hearty meal. It has a vegetable broth that is thickened with crushed tomatoes. Diced zucchini and bell peppers add crunchy texture and nutrition. For the health conscious, replace refined wheat ravioli with whole-grain or whole-wheat variety.

Salmon chowder – Celery, potatoes and onions are the basic ingredients of many soups, including salmon chowder. Dill, butter, garlic powder and onion provide the dominant seasonings. Mashed potatoes can be used to thicken this soup without the need for butter or heavy cream.

Gazpacho: this Spanish soup is easy to make, low fat and healthy. It is traditionally served chilled. The combination of tomatoes, cucumbers, and bell peppers, pureed in the food processor give this soup a fresh flavor that’s ideal for a hot summer’s day.

Caldo Verde: this Portuguese soup is made with kale, potatoes and onions and flavored with olive oil, garlic and salt. Some recipes add chorizo sausage, although smoked tempeh can be used as a replacement.

Lentil Soup: Popular in many Mediterranean and Middle Eastern cuisines, lentil soup is high in protein and carbohydrates. This hearty dish is perfect for a cold winter’s day. Strong hearty vegetables are used to accompany the lentils, including carrots, potatoes, celery, parsley, and onion. Common seasonings include garlic, cumin, lemon juice, olive oil, and vinegar.

Soup Recipes – The Cons
If you buy a pre-packaged soup, make sure to check for sodium and trans fats – sodium is often used as a preservative in the canning process.

If you use dried ramen, check for the fat and sodium content. Some varieties of ramen are high in both. Made from easy-to-digest, simple carbohydrates, they give you a quick energy spike, but are not nutritious, filling meals.

Cream or cheese based soups can be high in fat and trans fats, so check the label for the fat content. If you are making your own, consider replacing the cream with milk.

Extra ingredients: If you don’t have time to make your own, consider buying a canned, dried soup or and adding extra vegetables, brown rice, or barley for extra fiber and carbohydrates. For more protein, add a lean cut of meat or fish to improve both the taste and nutrition.