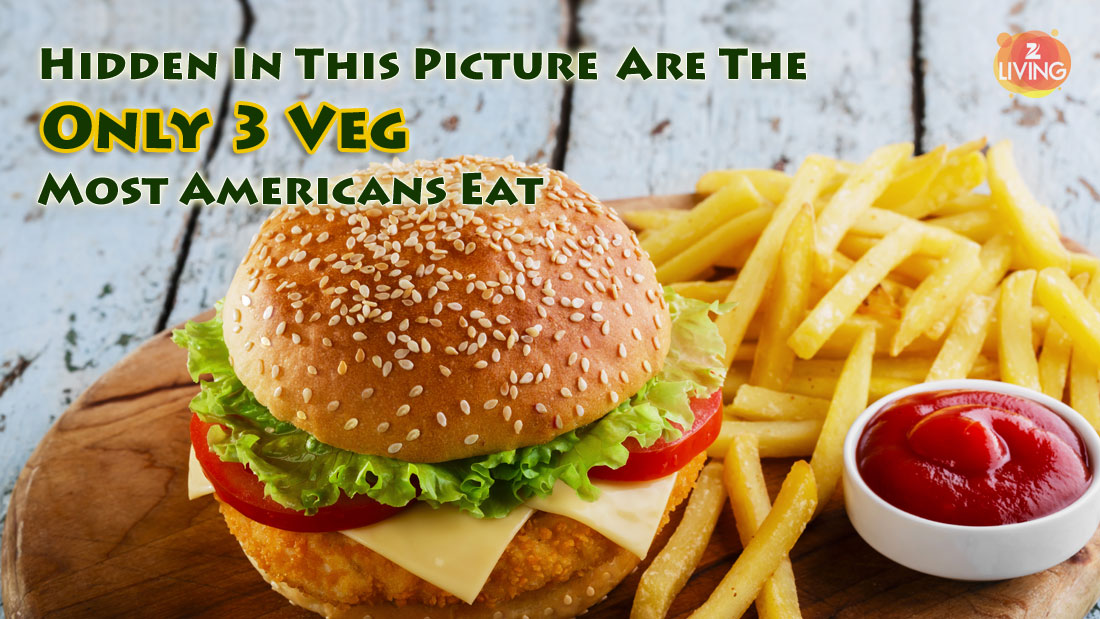 It is common knowledge that vegetables are good for you, but research shows that most Americans eat just three vegetables. That’s right, three! And before visions of kale, broccoli and cauliflower start swimming before your eyes, please know that these three are mainly potatoes, tomatoes, and lettuce.

Not so bad, you say? Well, what if we told you that these were being consumed in the form of French fries, ketchup and well, a skinny leaf trapped in a greasy burger? Yes, that’s how the average American is getting their daily dose of veg.

Painting this sorry picture is a new report released by the USDA that claims more than half of America is doing this despite there being a healthy awareness of the value of dark, leafy greens and fiber- and protein-rich legumes. Spinach, kale, beans, peas, and lentils have all seen increased consumption in recent years. But what happens when we choose to smother them in loads of fat, grease, salt, and sugar before eating them?

Data gathered recently from the Economic Research Service reveals that potatoes, tomatoes, and lettuce accounted for a whopping 59 percent of our total vegetable and legume intake in 2013. Despite more than 40 vegetables and legumes being considered in the survey, it appears that we generally prefer these three and choose to ignore our country’s vast, varied and excellent produce.

This Is What The Average American Ate In 2013:

White potatoes: 116 pounds of two-thirds of which were rendered into fries, chips, or “frozen or processed potato products”—hash browns, tots, and the like. In fact, potatoes alone accounted for almost one-third of total vegetable consumption.

Tomatoes: Forming around 22 percent of our overall intake, these vitamin A, vitamin C, and other nutrient-rich delights were eaten fresh only a quarter of the time. The rest of the time, we ate them in sauces, canned, or as an ingredient in soups or stews.

Lettuce: We definitely ate some lettuce, but in their fresh form, we chomped down on head lettuce, romaine, and leaf lettuces pretty much only when they were in our burger. The sad fact that this means lettuce accounted for a mere 7 percent of our total vegetable intake is made sadder when we realize this is actually an improvement over previous numbers. Apparently, in 1970, these three vegetables combined were 67 percent of the total share of vegetables and legumes consumed domestically.

Here’s What You Can Do To Change This:

Make healthier dietary choices by introducing more veggies into your diet. No one’s insisting you go on a completely vegetarian diet but there are ways to introduce them without breaking the bank, scaring away the fussy eaters or compromising on taste. From hacking breakfast recipes to include more veg to including them even in your desserts, there are many easy ways to sneak more veg into your meals.

Cooking them also means you get more nutrition, so don’t worry about having to nosh on just salads to get your vitamins, and you can even combine them with other items such as eggs to get healthy and tasty variations. If you hate all the chewing involved, feel free to blitz them into delicious soups.

PS: Head to our Food section for healthy recipes and the latest food trends.
Quick and easy Nutrition tips here.

Read More:
5 Fun Facts That Will Inspire You To Eat More Vegetables
The Veg Edge: 5 Health Benefits Of A Vegetarian Diet