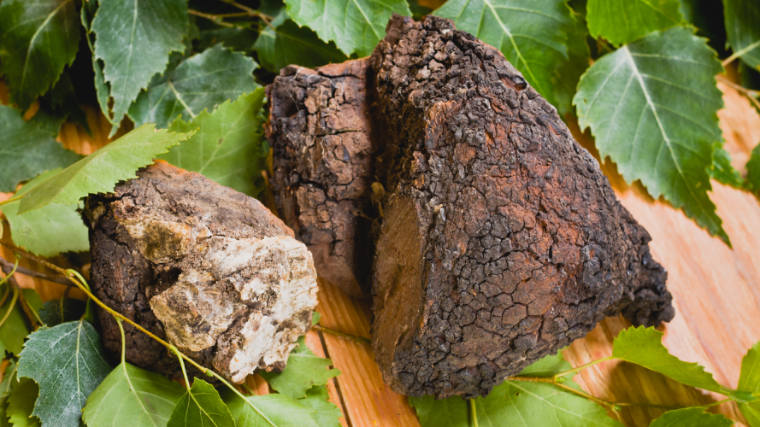 Today we will be discussing the magical benefits of one mushroom in particular. No, we’re not talking about Magic Mushrooms, although that would be interesting. We’re talking about Chaga Mushrooms. Found in the Northern hemisphere, the benefits of Chaga are well-known in the East, where Chaga has been used for centuries by people in Russia, Siberia, and other parts of Asia. Known as the “king of medicinal mushrooms,” it’s no wonder as to how Chaga adopted its name considering its use to treat a plethora of ailments including diabetes, heart disease, and even cancer.

Scientifically known as Inonotus obliquus, Chaga is a fungus that belongs to the Hymenochaetaceae family. Chaga is also referred to as “black gold” because it’s a dense black mass of mycelia that appears on the outside of infected birch trees and has a rusty golden-brown color center when it’s broken into chunks.

Chaga grows predominantly in cold climates and is distributed in birch forests throughout Russia, Canada, Korea, Japan, Eastern and Northern Europe, Alaska, and the northern areas in the United States like the North Carolina mountains. Chaga mushrooms are considered a medicinal mushroom in Russian and Eastern European folk medicine but are ironically called a “tree cancer” because, like any virus, it infects a host (tree) and eventually kills it. This is quite ironic considering that studies prove Chaga can help prevent cancer in humans but yet it causes cancer in trees.

Chaga mushrooms are one of the most potent superfoods, tonics, and natural medicines out there. Having an ORAC content of 1,104 per gram, Chaga actually has one of the highest ORAC values of any vegetable or fruit. ORAC stands for oxygen radical absorbent capacity. Meaning the higher ORAC value, the better a food is able to protect your body from diseases and free radicals. Chaga’s nutritional constituents are a major reason chaga serves as a primary adaptogen, antitumoral agent, cancer fighter, and a longevity tonic.

Chaga contains an array of essential acids, minerals, and micro-elements including:

There is an immense amount of research about the medicinal properties of Chaga Mushrooms that has doctors and alternative medicine advocates alike interested in its potential health benefits. As a result of more than 1,600 research studies over the past 40 years in Russia, it is believed that Chaga mushrooms can be helpful in treating the following health conditions:

Although the miraculous medicinal benefits of these mushrooms aren’t as popular in the United States, the healing powers of Chaga have been used in Russia for centuries now. So much so that people in Siberia still brew and drink Chaga instead of black tea or coffee.

In 1955, Chaga was approved for the public as a means to fight cancer by the Medical Academy of Science in Moscow, Russia. Studies have shown that the use of Chaga significantly reduces tumor growth and metastasis. The compounds in Chaga responsible for this are triterpenes, which are plant terpenes that cause tumor cells to self-destruct. Unlike other cancer treatments like chemo or radiation, Chaga does not harm healthy cells.

Research shows that beta-glucans and melanin found in Chaga can ward off tumors, cardiovascular issues, immune deficiencies, and viral, bacterial, and parasitic diseases. Chaga has a high level of melanin that protects DNA and helps fight radiation.

In Russia, scientists have noticed that in areas where people regularly drink Chaga tea, the rate of cancerous diseases have been much lower than in other regions.

Everyone wants to live longer and research now proves that drinking Chaga tea can actually turn that dream into a reality. As we get older, our cells’ ability to repair oxidative damage slows down. Consequently, more cell damage develops and the skin starts showing wrinkles and blemishes.

Chaga is extremely powerful because it contains the actual life force of trees; one of the oldest and powerful living beings on Earth. Trees can live for as long as 10,000 years with some even more than that. Chaga concentrates this power, and not only slows the process of our skin aging but can also protect against skin cancer. Chaga mushrooms contain a very high level of antioxidants, turning Chaga into a powerful anti-aging tool that promotes skin health.

Inflammation is your body’s natural response to injury or infection. Chronic inflammation occurs when your body sends out a response (cytokines) to an internal threat that doesn’t need an inflammation response. When this occurs, your white blood cells, now having nothing to do, start to attack healthy tissue, which can lead to many chronic ailments like osteoporosis and rheumatoid arthritis.

Cytokines are cell signaling molecules that help your white blood cells move toward any site of infection or trauma, which can cause chronic inflammation. Betulinic acid, ergosterol peroxide, and inotodial compounds found in

Researchers have suggested the most vulnerable organ affected by free radical damage is the liver. Think of free radicals as home wreckers, they break up a happy home by taking an electron from its pair to form another free radical, which in return finds another electron and does the same thing. This domino effect can disrupt and damage a cell as a whole. And free radicals and cellular damage can lead to oxidative stress. Oxidative stress is a major contributing cause of liver damage and tumor growth.

The benefits of Chaga Mushrooms go far beyond what’s stated above. Compacted with essential acids, minerals, and micro-elements, Chaga serves as a primary adaptogen, antitumoral agent, cancer fighter, and a longevity tonic. These benefits, known for centuries by the inhabitants of Chaga’s native lands, have now been demonstrated in scientific research. And the best is yet to be discovered. Chaga can be used as a tea, capsule, or even a tincture. Take into consideration that Chaga can lower blood sugar, so you should consult with your doctor if you have diabetes or any other problems regulating your blood sugar.