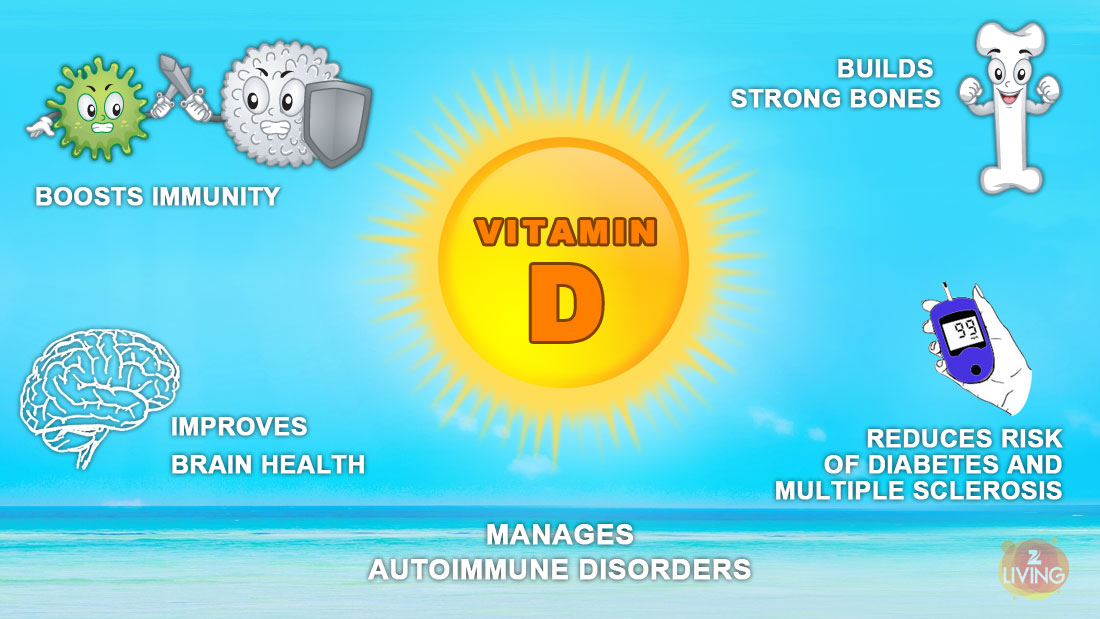 A few decades ago, people lived and worked outdoors. Children enjoyed playing in parks, clothes were hung outside to dry and people would cycle to nearby places. Almost everybody spent a good amount of time out in the sun.

But today’s world has a different story to tell. Children play on game consoles, clothes are dried indoors, a cab is easily available for even a short distance and the addiction to TV and the internet has limited our outdoor activities. What does this mean? To put it simply, you’re missing out on all the sunshine.

Vitamin D, also known as the ‘sunshine vitamin’, is produced when the ultraviolet rays of the sun strike the skin and trigger the synthesis of vitamin D.

Did you know that vitamin D is actually a pro-hormone and not really a vitamin? This is because vitamins cannot be synthesized by the body and need to be acquired through diet and supplements, whereas the body can make sufficient amounts of vitamin D from sun exposure.

The health benefits of vitamin D are numerous and it’s virtually impossible to list all of them here. However, here are the six most essential ones.

1) Boosts Immunity
Flu, cold and cough are the most common ailments that trouble everyone, from children to adults to the elderly. Illnesses occur when the main line of defense, the immune system, fails to function properly. Vitamin D stimulates the production of specific peptides in white blood cells and in epithelial cells (cells that form the surface of the respiratory tract) that fight infection and protect the lungs.[1]

A study published in the American Journal of Clinical Nutrition showed that school children that received 1200 IU of vitamin D per day had a 42 percent reduction in influenza A during the winter months as compared to children who took a placebo.[2]

2) Improves Brain Health
Over 5 million Americans have Alzheimer’s and it’s predicted that this number could reach 15 million by 2050.[3] Research says that around 90 percent of Alzheimer’s patients have low vitamin D levels.

A clinical study evaluated the effects of vitamin D on Alzheimer’s occurrence in elderly women. It was found that the group of women with the highest intake of vitamin D (20 percent of the total participants) had lower Alzheimer’s disease incidence.[4] Another study done in 300 elderly people found a 250 percent increase in the occurrence of Alzheimer’s in people with low vitamin D levels.[5]

Vitamin D is needed for bone growth and bone re-modeling, a lifelong process in which mature bone tissue is removed by osteoclasts (cells that resorb bone tissue) and replaced with new bone tissue by osteoblasts (cells responsible for the formation of bone tissue).[6,7]

4) Manages Autoimmune Disorders
Autoimmune diseases are ones in which the body and its immune system (such as white blood cells, natural killer T cells, etc) get stimulated or tricked into attacking the body’s healthy tissues, something that doesn’t happen under normal circumstances.

Vitamin D is an immune system modulator. A study showed that adult women taking 400 IU of vitamin D every day had a 40 percent decreased risk of developing rheumatoid arthritis, which is an autoimmune condition.[8]

Another study showed that a high dose of vitamin D supplementation improved the symptoms of rheumatoid arthritis in 89 percent patients and 45 percent of them showed complete remission. This indicates that adequate vitamin D can benefit joints.[9]

5) Reduces The Risk Of Diabetes
Vitamin D promotes calcium absorption and utilization, preventing and curing rickets & osteomalacia (softening of the bones). Calcium is necessary for insulin secretion, which suggests that vitamin D may in a way helps in maintaining insulin secretion.[10]

Types Of Vitamin D
Vitamin D2 and vitamin D3 are the two types of vitamin D. While D3 is synthesized in the skin after exposure to sun rays and from food sources such as cod liver oil, vitamin D2 is produced in the lab by exposing a plant sterol (compounds found in plants) to ultraviolet rays. Vitamin D3 is far more effective in preventing diseases than vitamin D2.

Vitamin D is found in very few foods naturally. Fatty fish is the main source of vitamin D. Mushrooms and egg yolk are other good sources. Milk doesn’t naturally contain the vitamin, but is fortified with it.

Read More:
Vitamin D Check: 5 Signs That Could Mean A Deficiency
4 Reasons To Optimize Your Vitamin D Levels (& How You Can Do It)
Vitamin D Foods: When The Sun Isn’t Enough
Hair Loss? Here’s A Much-Needed Dose Of Vitamin D To Strengthen Your Locks