The Centers for Disease Control and Prevention has reported one person has died and 16 others have become gravely ill from a salmonella outburst linked to raw chicken from Empire Kosher, Inc.

According to the agency’s investigation report, eight people have been hospitalized and a total of 17 cases of salmonella have been reported from September 2017 to June of this year. The areas where this outbreak has taken place were in New York, Maryland, Virginia and Pennsylvania. The one person that has passed away was reported in New York.

“In interviews, ill people answered questions about the foods they ate and other exposures in the week before they became ill. Of 14 people interviewed, all (100%) reported eating chicken products. Of nine people who reported brand information, seven reported specifically eating Empire Kosher brand chicken,” the CDC said in its announcement August 29.

According to the report, the youngest patient in this outbreak is younger than 1 year old and the oldest is 76.

“We are shocked and saddened to have just learned there may have been a death potentially related to a Salmonella outbreak and we extend our sympathies to anyone affected,” Empire Kosher said in a statement to CNN.

Salmonella poisoning usually transpires between 12 and 72 hours after consuming the bacteria and the symptoms associated with the illness includes fever, stomach cramps and diarrhea, which can last up to four days.

Critical illness may require hospitalization and antibiotics for treatments. The individuals most vulnerable to severe illness are children younger than 5, adults older than 65 and people with comprised immune systems are also at risk as well.

Health officials are still investigating and even though there has not been a recall issued, the U.S. Department of Health and Human Services issued a public health alert for all the raw chicken products Empire Kosher Poultry, Inc. has produced.

As alarming as this new may be, the CDC is not advising that people should avoid using products produced by Empire Kosher. But they advise following the steps below to prevent salmonella poisoning instead: 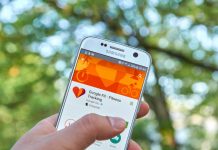 Google Fit Gets a Makeover