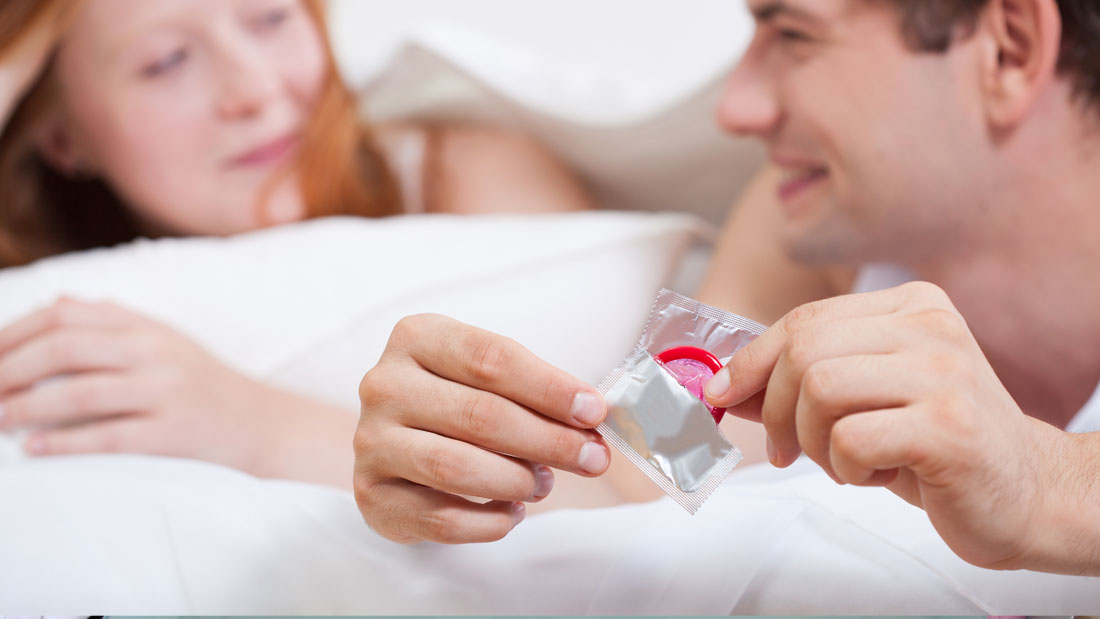 You’re all set to make love, frantically looking for that one little packet that will ensure your endeavor is safe. With all the hormones raging, it’s easy to understand why you haven’t read the instructions on your condom cover. One of the things most people miss is that condoms “greatly reduce, but do not eliminate” the risk of STDs. They also come with a three per cent failure rate. That being said, using condoms is the easiest, most trusted way to have safe sex.

While opening and using a condom may not seem like rocket science, studies have proved that more than 50 per cent of the accidents occur due to the mistakes one makes in the heat of the moment. Here’s a look at the common errors, and the right way to use protection:

Mistake 1: Buying The Wrong Size
You always make sure you get the right size of pants and shirts, why not do the same with your condom? Yes, you must measure yourself to figure this one out. Using a condom that is too tight or too loose could defeat the very purpose of using protection. If the condom is too tight, it is likely to break and leak. In some cases, it could lead to erectile dysfunction as well. Choosing a condom that is too large, means it could slip off during sex. Further, it could get lodged inside the vaginal canal, which isn’t just embarrassing but could expose her to bacteria. A good fit is where the condom sits snugly, but doesn’t roll down.

Mistake 2: Putting It On
Researchers from the journal Sexual Health, who carried out a study about condom usage habits, found that 25.3 per cent of respondents unrolled the condom’s sheath before putting it on. This is wrong. A higher percentage of respondents ended up putting the condom on inside-out, or rolling it out too tight. If the condom doesn’t have space at the end to collect the discharge, it is likely to tear. Take some time to read and understand the instructions on the packet carefully. A few tips—avoid tearing the pack open with your teeth. It may seem sexy, but you risk tearing the latex too. Pinch the end of the condom before placing it on the tip of the penis (so no air is captured), and then roll up gently. Never take it off and put it on again.

Mistake 3: Not Checking For Damage
Condoms come with an expiry date. It is usually a year from manufacture, but it varies, depending on the brand and the type. You must also take into account factory defects. Look for any holes and tears when putting it on. Another detail to keep in mind is how you store your condoms. The warmth from the body changes the chemical makeup of the polymers. This could change its efficiency. A cool place, like a desk drawer or a wardrobe closet, works just fine. Avoid placing the pack in direct sunlight, or in the dashboard of your car, where it could heat up.

Mistake 4: Using The Wrong Lube
Condoms come with lubricants, but it may be wise to have your partner use some as well. What this does is prevents too much friction, which could otherwise cause the condom to stretch. Additionally, it prevents pain for the woman, especially if she is experiencing dryness. Use a water-based lubricant; an oil or petroleum-based one could alter the chemical composition of the condom.

Mistake 5: Not Using A Condom At All
Despite popular belief, condoms aren’t the most commonly used form of birth control. Pulling out, is. There are two problems with this technique; your timing may not always be accurate, and pre-cum (the fluid discharged before ejaculation) often contains sperm.

Instead of assuming that the woman is on the pill, have a conversation about the type of protection you prefer to use. Worry-free, safe sex is synonymous with happy sex.