Are you guilty of handing your phone or tablet to your children, just to keep them occupied till you get your work done? You are not alone. Most parents of young children have been there and done that.

The Generation Y, “typically perceived as increasingly familiar with digital and electronic technology” have found serious competition in Generation Z, who are way ahead and needier when it comes to technology and screen time.

Children are always surrounded by gadgets, be it a television, smartphone, computer or video games. With so many to choose from, it is definitely hard to restrict their screen time spent, but it is important to realize that though these gadgets may be useful, overuse is not healthy.

A study conducted by the University of California, Los Angeles, found that children who spent too much time with gadgets had emotional problems and had a difficulty in connecting emotionally with family and friends.

Some common problems linked to overuse of digital technology include:

According to the American Academy of Pediatrics (AAP): 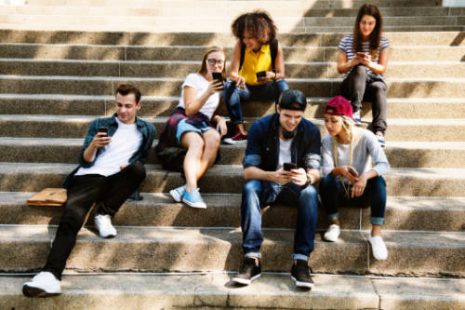 Considering these statistics, the issue parents face is enormous. But there are ways to tackle it strategically, without having to face the wrath of your teenage daughter who may be forced to miss out on her constant use of Snapchat.

What’s the solution then? One would be to make children understand how the overuse of technology can impact their brain and deter their emotional and social growth, along with negatively impacting their academics.

Many parents, including tech giants like Steve Jobs and Bill Gates, have admitted to regulating their children’s tech usage, so don’t feel bad when you do it too.

Studies recommend a “healthy media diet” where parents and children work together to come to a consensus on how much screen time is good for them. It is a win-win situation because the children do not feel completely deprived and the parents are happy too.

Another breakthrough would be if schools chipped in to help fight this internet epidemic. As of September 2018, primary and middle schools in France will face a ban on cell phones. This decision, made by the education minister, is in view of the lesser time children are spending playing outdoors. It is also an attempt to reduce the incidents of cyberbullying, which tend to lead to serious emotional disorders like depression.

Technology has definitely taken over our lives and it is high time we fight back, at least for the good of our children. Though there may be times when all you want to do is prop your toddler in front of the television, resist the urge and try to move toward a routine that involves lesser screen time and more family time.

Weingus, L. (2018, June 06). We Know Tech Can Be Dangerous. A New Study Shows How Complicated It Can Get For Kids. Retrieved from https://www.mindbodygreen.com/articles/how-dangerous-is-tech-for-kids

Inglese, E. (2018, February 26). Silicon Valley Parents Are Raising Tech-Free Kids, And Maybe You Should, Too. Retrieved from https://www.mindbodygreen.com/articles/silicon-valley-parents-are-raising-tech-free-kids-and-maybe-you-should-too

Loewe, E. (2017, December 13). This Is How The French Deal With Cellphone Addiction. Retrieved from https://www.mindbodygreen.com/articles/france-bans-cell-phones-from-schools